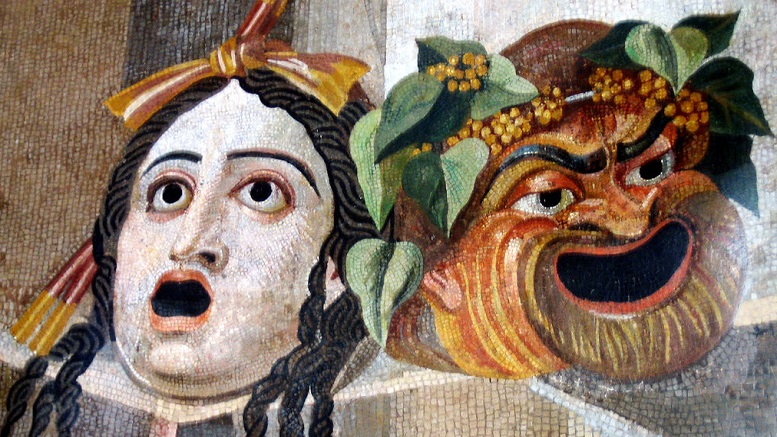 I must begin by commending this theatre on its more-than-adequate parking facilities (they’re free too!). If you’ve ever had to find a parking spot ten minutes before curtain time at the City Theatre on the Southside, you’ll know what a struggle it can be. Be warned – if Quantum’s Tamara had you running around too much, this show is not for you. It’s a VERY large theatre, and the play is presented in the popular modern ‘drop-in’ style, where the audience mingles freely with the cast who act out little mini-dramas all over the space. Make sure to pick up a program as it contains a handy map that you’ll need to keep your bearings. The ensemble cast is so large they have elected not to list it (presumably it’s available online somewhere).

Kudos to the director, as not once did I notice anyone appear to forget their blocking, which is an impressive feat for a production of this size. The playwright, who makes the unorthodox choice of remaining uncredited in addition to not titling the play, is clearly a fan of Orwell and Huxley. As one listens in on the conversations between the actors, one starts to build a picture of the wider world that these characters inhabit. If anything, the world the playwright creates is a little too derivative of Orwell’s 1984, with its conflicted attitude to sex, intrusive Big-Brother-like government, and endless wars being waged in faraway places that keep the populace distracted from the extraordinary inequities going on right in front of them. But this is a minor quibble.

The real joy is undoubtedly to be found in the nuanced performances that superficially may appear bland, or even disinterested, but which mask turbulent undercurrents of human desperation and desire rarely seen on the stage anymore. I must give a ‘shout-out’ to the fine actor playing ‘Unknown Sales Clerk’ for a virtuoso display positively dripping with emotion and subtext, despite having such deceptively simple lines to work with as “The receipt is in the bag”. With just the right facial expression and intonation, the real meaning beneath the text is conveyed, which, if I had to put it into words myself, I would fathom to be something like “Please deliver me from this abject hell before I kill myself”.

From the gangs of over-sexualized tweens pursuing milquetoast fashion trends offered up by amoral corporations, to the legions of roaming elderly who have nowhere better to go – it soon becomes clear that all the characters in this play are destined to live out their lives in the concrete colossus that has become their dreary substitute for any sense of home or community in this theatrical descent into the abyss. In a lesser work there might have been an upbeat resolution or deus ex machina that pulls these unfortunate proles out of the soul-sapping misery that they, like a suburbanized Sisyphus, have to endure each and every day. This play makes no such easy choices.

The final impression is that this is an early work of an emerging and powerful dramatic talent; it is a laudable achievement to be sure, but it tries just a little too hard, as it often the case with first plays. The underlying sense of hopelessness and despair is applied too thickly for it to be considered a true masterpiece of modern dystopian literature. But, despite this shortcoming, it is surely Broadway-bound if there is any justice in the world.

Untitled by Anonymous is playing continuously at The Mall At Robinson and similar locations all across the United States.

Be the first to comment on "Theatre Review: “Untitled” playing at The Mall At Robinson"