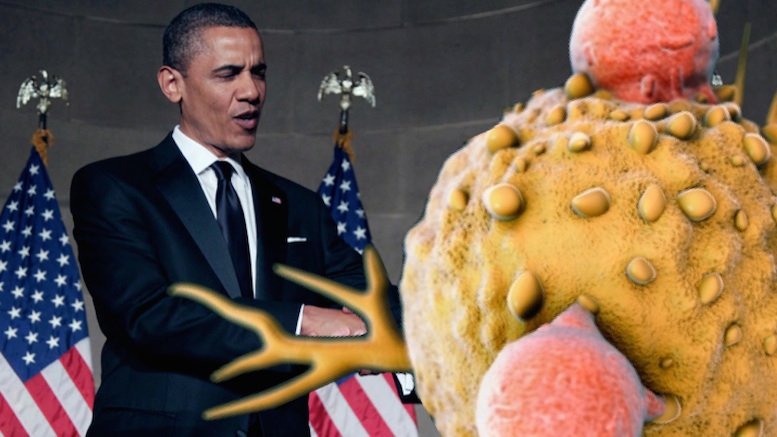 The White House announced today that a truce has been declared in the longstanding War on Cancer, which was started by President Nixon in 1971. All efforts to vanquish the enemy are to be halted indefinitely at the stroke of midnight. President Obama explained how this came about during a brief statement made in the Rose Garden.

“When a war has gone on this long without a decisive victory by either side, any military historian will tell you a truce is the only ethical move.”

Obama emphasized that this was in no way an admission of defeat.

“This isn’t the Iraq war and it’s certainly not Vietnam. If anything this is the Korean war.”

All research efforts to combat cancer by the National Institutes of Health will be immediately defunded in accordance with the armistice. When asked whether the war analogy was being pushed too far, U.S. Surgeon General Dr. Vivek H Murthy snapped back:

“What do you mean ‘Analogy’  – didn’t you read my official title? I’m a General goddamnit.”

NIH Director Francis Collins tried to explain to the cabinet that, what with it being a disease and all, cancer does not just ‘stop’ because of unilateral political declarations. However he encountered the same brick wall that junior staffers in the Bush administration encountered when they tried to point out that you can’t declare a war on ‘terror’.

“We’d be declaring war on an indefinite noun. Isn’t that kind of weird?”

The unexpected development left an exasperated Collins recommending that anyone who has cancer, has had cancer, or might get cancer in the future consider relocating to a country that is not obsessed with overusing inappropriate war paradigms or repeatedly appointing ‘Czars’ to make it look like something is being done about a problem when really it’s not.

On reflection NIH Director Collins came up with a new approach and suggested to the Department of Defense that the current scenario is more like the end of WWII with cancer being the Soviets. Defense Secretary Carter immediately recognized the urgency of the situation.

“That means we’re in a Cold War with cancer and we must therefore resume funding the shit out of any research that might help beat this insidious commie disease. I will inform the Commander-in-Chief immediately.”