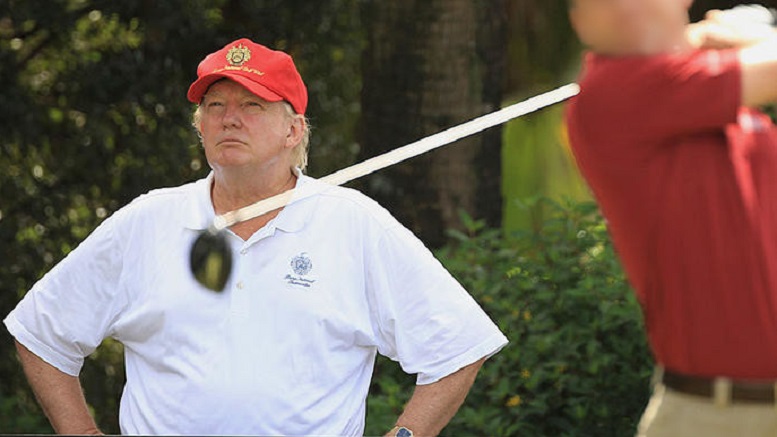 (Sterling, VA) There were solemn scenes today at a DC area golf course as a visibly moved President Trump held a moment’s silence on the 9th green to mark what he described as a terrible tragedy playing out across the United States.

“An epidemic of shanked shots is happening right before our very eyes.”

Following the respectful period of reflection, the President said that merely remembering those golf balls that could not be recovered despite heroic efforts by caddies was not enough.

“We must act, and act fast, to stop this entirely predictable looming catastrophe.”

He had particularly harsh words for reckless golfers who actually take pride in shanking and slicing their shots, which pose a danger to fellow players on adjacent fairways.

“Someone could get hurt – or even die!”

Fortunately the White House has identified ways to mitigate the situation, but it will require that everyone plays their part. Despite being a competent golfer after hundreds of thousands of hours practice, Trump said he would immediately head to the driving range to lead by example.

“It is too much to ask that we all spend some extra time working on our swing?”

He was particularly unimpressed with those who say calls to act more responsibly trample on their freedoms to play golf however the hell they please.

“Some of my supporters think they can tee off no matter how poor their club control is. To them I say: shame on you!”