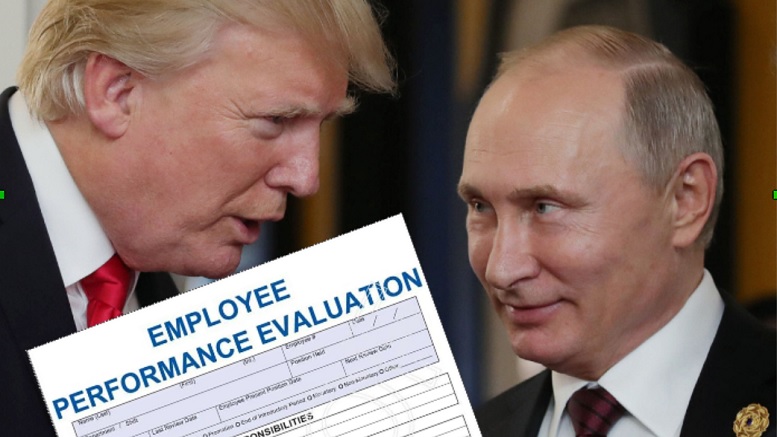 As he heads to Helsinki for his annual job evaluation, President Trump is experiencing a feeling familiar to many Americans – that of whether they will get canned for poor performance on the job.

However Trump is said to feel confident in his performance to date as a Puppet President, since taking on the role in early 2017.

“I feel I have been a good stooge – a very good stooge. So I anticipate getting a satisfactory rating and maybe even an excellent one.”

But his employer, Russian President Vladimir Putin, is rumored to be a harsh boss who demands perfection from his employees, and then some, according to insiders.

Trump is still trying to make up for some black marks on his record, like when he didn’t fire Jeff Sessions, and the time he considered quitting to work for startup international puppetmaster Kim Jong-un. That probably explains why Trump has being trying extra hard to impress in the weeks just before his evaluation, explains local staff recruiter Dan Haynes.

“A determined employee will pull out all the stops to impress his employer when a contract is up for renewal, and Trump has done just that by undermining Theresa May, disrespecting the Queen of England, and describing the EU as a foe.”

Haynes is confident President Trump his still have his position as Puppet President for years to come.

“You just don’t let talent like that go in this market.”