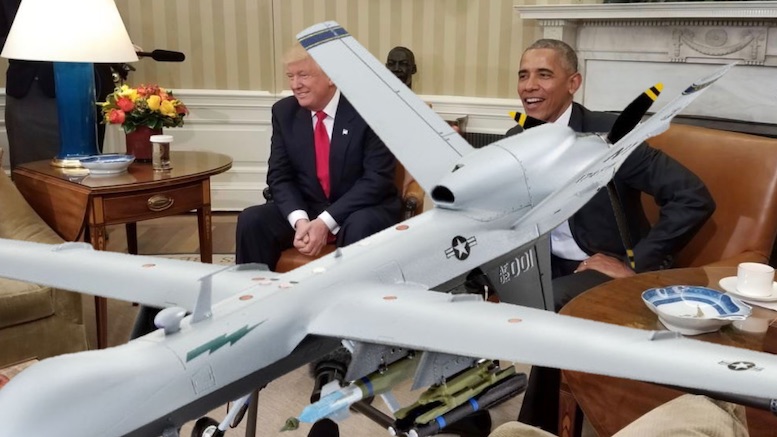 (Washington, DC) Donald Trump visited President Obama at the White House today for one of the quainter features of the transition, the traditional afternoon tea party at which the ‘Passing of the Drone’ occurs.

The ceremony has a long history dating back to 2007, when then-President George W Bush invited President-elect Obama to the White House to receive instructions on the global assassination apparatus he was about to inherit. The occasion was noted by the handing over of a novelty fountain pen in the style of a hellfire missile.

President Obama has embraced the tradition and arranged to hand over a decommissioned Predator drone to give the proceedings a bigger WOW factor that more properly reflects their deadly import.

During a light afternoon meal of tuna sandwiches and fresh squeezed lemonade, Obama officially presented President-elect Trump with the unmanned aerial vehicle as a token of the awesome global surveillance and killing infrastructure that the former Reality TV star will soon inherit.

Obama then joked ‘Don’t kill anyone I wouldn’t kill’ before posing for pictures.

Trump appeared to take the remark well, but later tweeted that he would kill anyone anywhere anytime whenever he feels the compunction to do so.