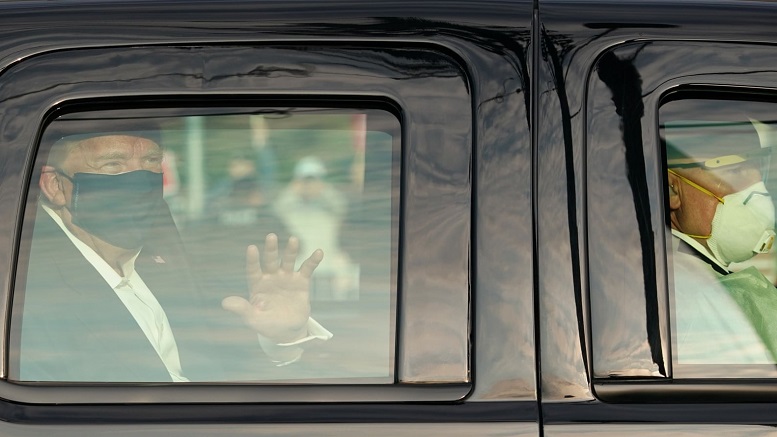 (Bethesda, MD) Following a brief car journey to wave to his supporters outside the Walter Reed National Military Hospital where he is in residence, President Trump took to twitter tonight to reassure them he will always be number one no matter what.

“I’m going to have the biggest, most spectacular respiratory failure you’ve ever seen. Trust me – everything I’ve done up to now has been leading to this moment. WINNING!”

Though he has been occasionally willing to take second place to a select few of his predecessors in the past – like George Washington, and Abraham Lincoln when it came to helping black people – he insists his demise while Commander in Chief will have no equal.

“Lincoln didn’t do a thing to bring about his death in office – it was all the work of that guy who shot him at the movies. Same deal with that loser JFK. But my Presidential croaking will be all down to me. I get FULL CREDIT! “

Trump also criticized Obama for his dismal performance with his pathetic excuse for a pandemic, the H1N1 swine flu.

“His numbers were terrible even if it was less dangerous overall than the coronavirus.  Like a small fraction of mine. TINY! And he didn’t even get sick from it himself – let alone die from it. SAD!”

Addressing the confusing issue of the rosy statements his medical team, most notably Dr. Sean Conley, have been putting out, Trump said that’s all by design.

“When you’ve been a hugely successful Reality TV star like I have you understand it’s all about building up an expectation and then reversing it dramatically at the last minute.”

It’s for that reason Trump says he’s so disappointed with his Chief of Staff for releasing information about his true medical predicament.

“The guy has no clue! You don’t spoil the season ending by leaking details of my struggle to maintain oxygen saturation levels before the grand finale. DUMB!”

But he predicts even Mark Meadows won’t be able to dull the impact of his last role.

,”It’s going to be huge folks. Those other 209,000 COVID deaths will have nothing on this one. Believe me.”