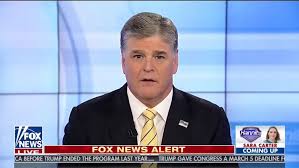 Saying he was not to be disturbed as policy briefings were critical to a well-informed functioning executive, President Trump settled down to his daily briefing by senior advisor Sean Hannity.

“She’s my rock in the White House.”

Trump admitted he did lose one of his closest policy advisors recently due to a disagreement about border security.

“Ann will be missed.”