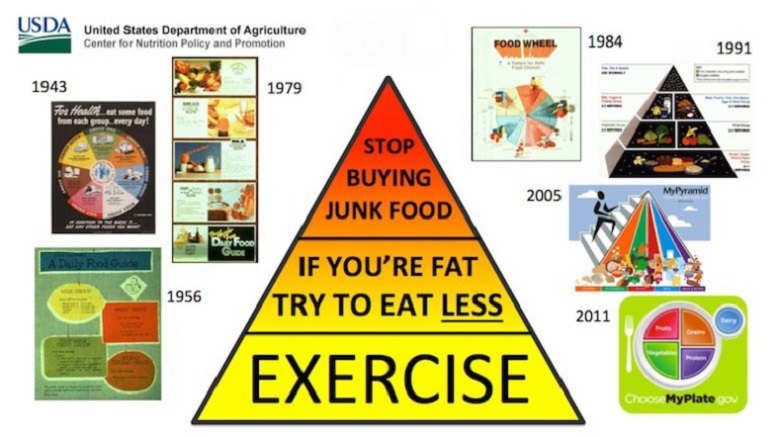 (Washington, DC) The USDA’s Food and Nutrition Service has released a new food pyramid designed to aid Americans trying to losing weight.  This follows previous redesigns of the food pyramid in 1991 and 2005, and a move to a plate-based graphic in 2011. The change was prompted by the realization that almost a century’s worth of work defining carefully calibrated portion sizes and numerous color-coded food categories simply wasn’t working.

“We now realize we’ve been part of the problem all along.”

They decided to go back to the pyramid shape as most people still seem to associate that with how you should eat. They drastically simplified the food pyramid into three sections, which don’t even correspond to food groups anymore, but are filled with blindingly obvious instructions that will help you lose weight should you ever manage to follow them by stubbornly drilling them into your brain over and over and over again every single day until it makes some kind of impression.

“We get it – losing weight is not easy and there is a lot that is not understood about human drives, habits and addictions. But making people do higher math and memorize ever-changing food categories on top of everything else has not been helping – that’s for damn sure.”

Some groups, in particular the fast food lobby, objected to the straightforward use of terms like junk food, arguing that a multipage brochure explaining the many different chemical structures of carbohydrates would be far better, but USDA officials are not falling for it anymore.

“We know what they’re up to – they’re trying to make it so complicated you just get frustrated and instinctively reach for that soothing cheeseburger, shake and fries. Which everybody already knows is junk food by the way. EVERYBODY.”

Unfortunately, decades of traditional weight loss indoctrination about the importance of eating a diet low in fat, then low in carbs, then protein only for six weeks following by knowing the glycemic index of everything that passes your lips means it’s now second nature for us to overthink things when it comes to healthy eating and weight management. When the new pyramid was first tested on a focus group, USDA nutritionists were bombarded with questions such as whether the reddish parts are more important than the yellowy bits, and how does it relate to other shapes.

“Think of it as a circle if that helps. We honestly don’t care as long as you 1) Stop buying junk food, 2) Eat less food if you need to lose weight, and 3) Exercise, no matter whatever weight you’re at.”

People then asked if there were additional resources online they could research to better understand the new guidelines.

“It’s all there in the new food pyramid and anything else is just obfuscation and prevarication. Don’t bother looking those words up if you don’t know what they mean. You’re just using that as an excuse to browse the internet instead of doing some exercise.”

The USDA have also designed a worksheet for people who want to start exercising for the first time but need help deciding which piece of expensive exercise equipment to order from the Home Shopping Network:

Part II.  Do you have a park nearby, or a street, or a set of stairs in your home or apartment block, or a table you can walk around in your kitchen or dining room, or 10 feet of clear ground anywhere at all? If ‘yes’ to any of the above go to Part III.

Part III.  You don’t need to buy any exercise equipment. Go and take a walk. NOW.