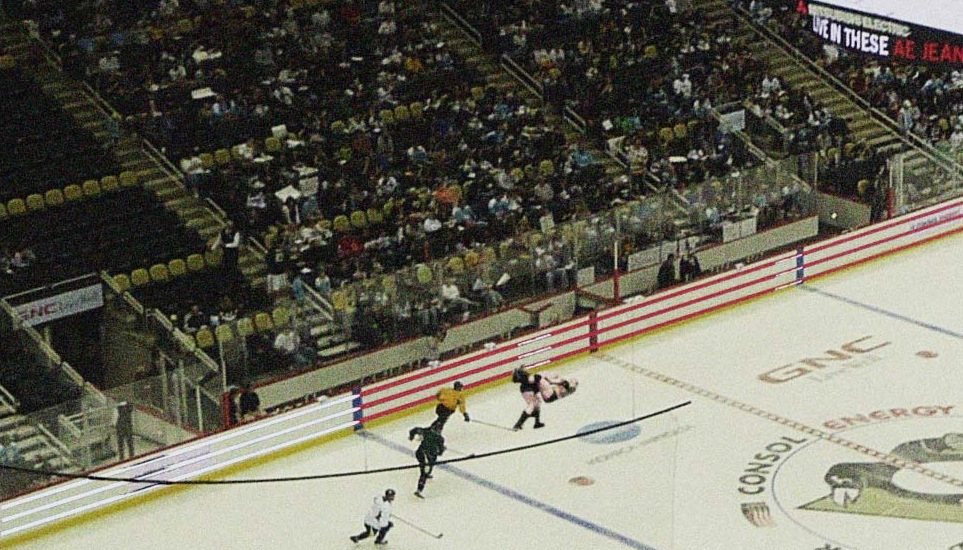 Let's get ready to rumble on ice!

Fans of ice hockey and showboat wrestling may soon have reason to feel Christmas has come early as the National Hockey League and Worldwide Wrestling Entertainment are set to announce a joint venture to bring a new ‘mash-up’ league to North America. It will not replace the NHL or the WWE shows but is expected to draw strongly from retiring NHL players, as well as wrestlers who are struggling to stand out in WWE’s crowded stables.

Detractors point to the dismal failure of the XFL football league earlier in the century, which was also a WWE joint venture, in that case in a partnership with NBC. But insiders argue this analogy misses a key difference between football and hockey.  Violence for its own sake is strictly forbidden in football, so merging it with a ‘sport’ that is essentially about combat never made much sense. In contrast they argue that in hockey there’s a very healthy tradition of violence.

“Even more so than in wrestling, actually.”

The new competitive league will start up in the Northeast region and will be known as the Physical Hockey Unleashed Conference, or the PHUC. The attraction of awarding one of the initial franchises to Pittsburgh is obvious, and can be summed up in two words, Mario Lemieux.

“We’d love for Mario to participate. He’s had back issues so some of the full body slam moves might not appeal to him, but everything’s up for negotiation when it comes to ‘Le Magnifique’. He’s also a bit of a classy gent, so he might turn us down anyway.”

But what do the PHUC organizers think of that other well-known former Penguin, Jaromír Jágr?

“Jagr’s in as soon as his current contract expires, which is great as he strikes us as a natural PHUC badboy – hell, we’d happily sign him up to a WWE contract even without the hockey tie-in.”

The NHL and WWE will be co-equal partners and teams are eventually expected to draw players equally from both leagues. They will initially feature a majority of professional hockey players as the wrestlers are expected to struggle more at first.

“While it’s fair to say that every hockey player knows how to throw a punch, not every WWE wrestler is a good skater. They’ll take some time to learn how to perform their signature moves without the aid of friction, but they’ll get there in the end.”

The rink will look much the same as before, except there will be ropes around the perimeter for jumping off. Scoring will be a combination of traditional goals, and points awarded by judges for executing successful wrestling moves. One question is whether the icing rule will stand.

“Yes, though the opposing team will now have the choice of a face-off or a cage-match at the location where the infraction occurred.”

Most current penguins treated the news with mild indifference. Evgeni Malkin was distinctly unimpressed at first, but when informed that he could make tens of millions in the PHUC as long as he agreed to do his best ‘Terminator’ impression, he warmed up to the concept. Fluery is also open to the possibility sometime in the future.

“Though you know fans will blame the goalie everytime we crash out of the playoffs, like always.”

The one person who was notably more excited than most about the new conference is Penguins forward and captain Sidney Crosby.  A longtime Pittsburgh RAW fan, he says he cannot wait to go ‘mano-a-mano’ with his idol, “The Undertaker”. He does not plan to be known as Sid the Kid anymore either.

“I have already developed my own WWE-style supernatural persona called ‘The CroZ’ in anticipation.”

The extent of Crosby’s enthusiasm becomes clear when he brings out a prototype leotard he has personally designed for himself. As for getting to throw his weight around, PHUC officials confess that won’t exactly be true.

“Don’t tell Sid, but we’ll be instructing the other combatants to go easy on him and basically fall down whenever he gets close. Ultimately that handsome mug of his is just too marketable to risk messing up.”