[April 1st, 2015] The White House today emphasized that there will be no April fooling or pranking of any kind by the President or the leadership of either party now or in the future given the disastrous consequences of pranks gone awry affecting the top levels of government since the year 2000.

“I think we can all agree that after the multiple accidental presidencies of the last fourteen years, enough is enough.”

The origins of the globally significant mishaps can be traced to the almost surreal shenanigans during Bill Clinton’s tenure. Though his elections to the Presidency were legitimate and sincere, the antics of his second term fostered a general sense of silliness and detachment from reality.

Politicians on both sides of the aisle could barely contain their laughter as they watched Bush Senior awkwardly try to support his son, even as he struggled to understand how someone who was self-admittedly still mentally transitioning out of the Frat house could have secured the top half of the Republican ticket. But the laughter abruptly stopped on election night, when it became clear there was barely a handful of votes between the candidates. ‘Dubya’ saw a potential disaster in the making.

“I immediately called Al and said the gig’s yours – I’m out of this, even if it means bribing the entire Texas electoral college.”

But Vice-President Gore, who was known to be a straight arrow, insisted the situation be allowed to play itself out, which it did, ending up in the hands of the Supreme Court.  That was a huge relief as it meant things could be righted after all.  When the ruling in favor of Bush was made, Republican officials assumed it was all part of the Court’s well known fondness for buffoonery.

“We send Justices Rehnquist and Scalia a note saying ‘well done – you totally got us’, but apparently they were serious!”

President-elect Bush pleaded with Gore to find some constitutional workaround allowing him (Gore) to take the job, as he (Bush) could barely manage a baseball team, let alone the country. But the fastidious Vice-President insisted that the will of the people and ruling of the highest court in the land was sacrosanct. As Bush recalls, Gore, though understandably upset at missing out on being President, was highly amused by Bush’s predicament.

“He was pissing himself laughing down the phone at me. He just about sapped whatever little shred of confidence I had, the shit.”

Out of desperation Bush decided on a leadership strategy whereby he would pick a random course of action and stick to it doggedly, which appeared to work surprisingly well. The revelation that his Presidency was the unintentional consequence of a misfired prank goes a long way to explaining some incidents that were misunderstood at the time. When Chief of Staff Andrew Card informed Bush about 9/11 in a Florida classroom, many at the time thought Bush looked dumbstruck because he didn’t know what to do.

“Actually I was thinking this is a total ruse, and how am I going to get them back.”

Bush was horrified when he was told it was true that a plane had hit the World Trade Center, but when informed a second plane had impacted, he became his jovial old self again.

“I was like, classic mistake boys – you totally had me, but then like all amateurs you pushed the joke too far.”

It was only when he saw the constant footage of distraught New Yorkers that he realized he was in for a long serious wartime Presidency as a result of a goof gone wrong. The Republicans decided then and there that pranking was out, which they’ve largely held to apart from a gag by John McCain that misfired when Sarah Palin turned the tables on him by taking his jestful invitation to join the ticket at face value.

“Joke’s on you, John, cause I’m gonna ride this thing all the way to Tea Party Icon status.”

But it was the Democrats in 2008 who arguably committed the most unanticipated act of Presidential tomfoolery. With Hillary seemingly having a lock on the Democrat nomination, her staffers decided they would pull a hilarious prank on her to ease their boredom. Their plan was simple – pick a freshman Senator from out of the blue and pretend there was a serious threat to her supremacy. A near unknown called Barack Obama was totally up for it as he loved nothing better than a good old ruse.

“He’s apparently quite the trickster at home, so the thought of playing a joke on the former Senator for New York was right up his alley.”

Obama jumped feet first into the race, safe in the knowledge that it was all harmless high jinks.

“I was like, this is great. First I’m black, and my middle name is Hussein, so it’s clearly a send up, but I still went and did all these things to heighten to joke, like confessing to taking cocaine, and I even got this former pastor of mine to dial the crazy way up.  I wanted to say I was a Black Panther too, but they politely reminded me that some subtlety is required for a truly perfect wind up.”

Unfortunately, major party donors, the Kennedys, and the American public failed to realize it was all a massive ribbing, and Obama found himself the Democratic nominee.

“It was annoying because I ended up having to lead the free world for eight years when I’d have much preferred to remain a low key Senator and focus on writing some more books and hanging out with Michelle and the kids. I may like a joke but I’m actually far too aloof and professorial to be proper Presidential material. But that’s what can happen when a prank goes wrong.”

Obama, who is soon to leave office, says he is done with high-stakes political japing.

“With my luck I’d probably end up being U.N. Secretary General by accident, so I’m sticking with knock knock jokes from now on.”

Hillary was initially pissed but has since calmed down, especially with her now being in an even stronger position for 2016.

“Everyone’s agreed that there will be no punking this time around, as it’s far too dangerous.  Though I see the Republicans are back at it again with Ted Cruz.  I mean, that has to be a joke. Right?” 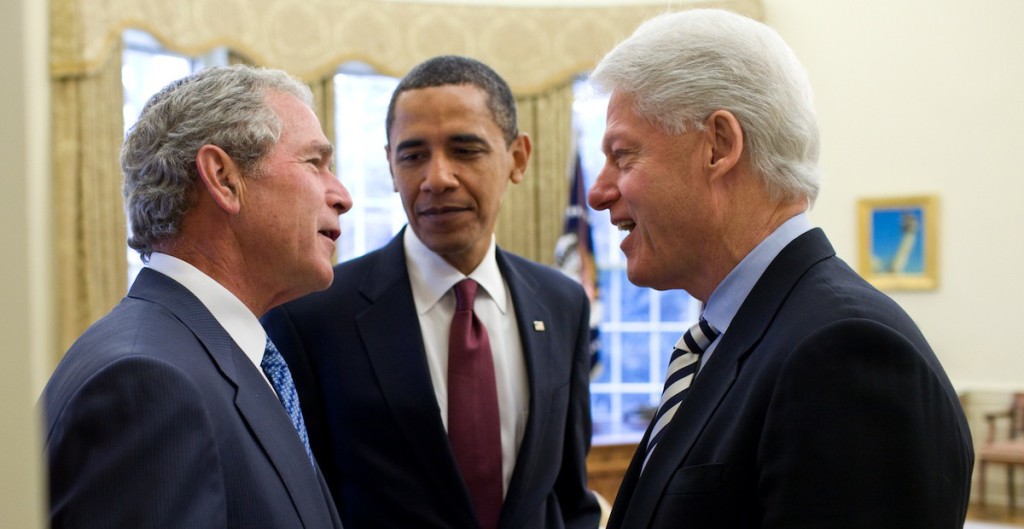 Three Presidents who are easily the match of the Founding Fathers when it comes to japing.