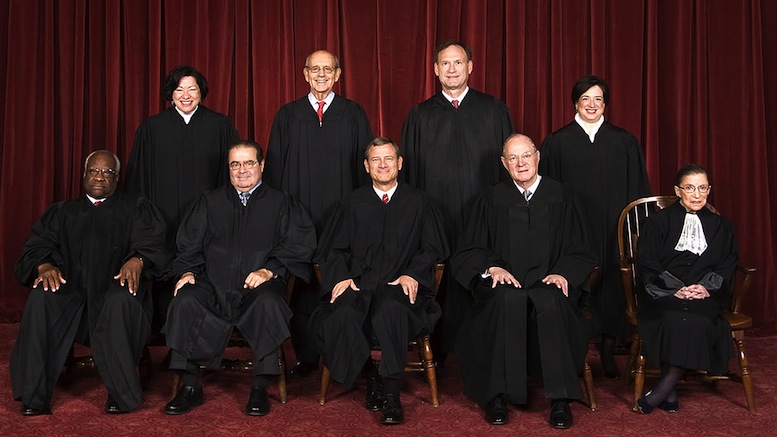 The world has become a far too critical place these days, at least in the eyes of the four women and five men who have lifetime appointments to the U.S. Supreme Court. The move to implement a kinder fairer less-hardworking approach to jurisprudence originated somewhat surprisingly with known hardliner Samuel Alito.

“If we decide an issue that means there will be a winning side, but also a losing side, and who wants that?”

Wouldn’t it be far better, he reasoned, if we all retreat to our vacation homes year-round and leave everyone feeling like they are probably in the right? Legal scholars insisted they must continue working for their pay because the Constitution says they should, but outspoken Justice Antonin Scalia, who used to be a staunch Originalist, is far more relaxed about legal interpretations ever since he took up fly fishing in Montana.

When it became clear that this line of thought was shared by the whole bench, a delegation of concerned citizens descended on Justice Breyer’s chambers to remind him he is one to judge because he is paid a handsome salary using taxpayer funds for that very purpose. But the liberal stalwart was unavailable as he was busy tanning himself on a beach in the Caribbean.

“Let he who is without sin cast the first stone.”

That was Breyer’s response when his social media accounts were deluged with calls for him to return and adjudicate on the issues of the day. He then gingerly sipped on his Pina Colada which he will now be able to expense because he technically was working when he tweeted the response.

“I have a question – how is telling someone they’re right or wrong fair?”

“As befits Obama picks, we are both believers in hope, and that includes not dashing people’s hopes by issuing judgements against them.”

The advanced age of the court has led some to worry about what might happen if a justice loses control of his or her faculties. Court elder Ruth Bader Ginsburg points out this is no longer relevant thanks to the changes they have made.

“It doesn’t matter how demented you become if you have no intention of ever weighing a legal point again.”

Justice Anthony Kennedy, often the swing vote on the court, had previously voiced concerns that too many split 5-4 rulings along largely partisan lines undermines the public’s confidence in the judicial branch, but such fears have now evaporated.

“It doesn’t get more nonpartisan than a 0-0 decision.”

Chief Justice Roberts is confident this will establish his reputation as a leader of one of the historic incarnations of the Court, just as Earl Warren was before him.

“Nothing would make me prouder than to go down in history as the molder of the ‘Wiffleball Court’ where nobody has to lose.”

Be the first to comment on "“Who Are We To Judge?” Asks U.S. Supreme Court"