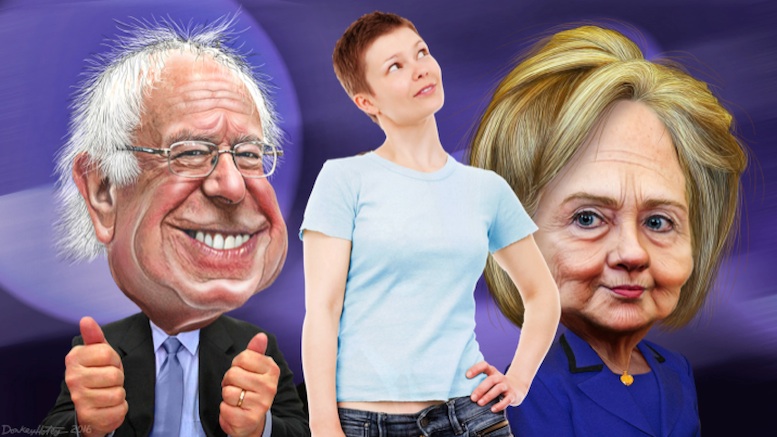 [Manchester, NH] Today is a pivotal moment in the life of young Alice Spears, since she is about to make a choice in the Democratic primary that will determine her sexual identify for life.

“On the one hand I’m leaning towards Bernie which is where the boys are at, but I’m also drawn to the pantsuit-wearing Hillary sisterhood, and we all know what that means.”

She initially thought she would make her decision based on the differing economic approaches of the two leading Democratic candidates. But such policy differences count for little against the powerful hormones that dictate the voting choices of the modern young woman.

“Then there’s the fact that if I don’t vote for Hilary I am condemned to eternal damnation, which is an argument for indulging my lesbian tendencies.”

Whereas in many other aspects of life the concept of gender fluidity is taking hold, in the Democratic primary tender blossoming women are forced to make a binary choice which places them firmly in the heterosexual or homosexual camp.

“If only I was a man so I could make my decision based on the politics instead.”

In the end, Alice became so distraught by the pressure of her decision that she decided to become a Republican instead so she could be told what to think.

“At least with them, you always know where you stand as a woman.”