As part of its ongoing mission to improve life in Britain for all, the Sun Newspaper has tracked down hard evidence of Queen Elizabeth’s pre-tween period of Nazi fandom, which followed her short-lived infatuation with Totalitarian Communism, and preceded her obsession with performing cartwheels at every possible opportunity. The revelation is bittersweet news for the leaders of Europe’s modern Neo-Nazi movement.

“It’s such a shame we couldn’t keep her onside in the long run.”

While noting that the future monarch quickly distanced herself from her brief flirtation with fascist ideology at the age of six, they still see her as a prime role model for modern day racist skinheads.

“She clearly doesn’t suffer fools. And what an exemplary straight-backed and stiff-armed salute! If it wasn’t for the fact that she supports representative government and the right of people to remain alive even if they’re not white, she’d be a shoe-in for Supreme Leader of our movement.”

They’re not quite as enthusiastic about Princess Margaret, the Queen’s late sister, who was three years old at the time.

“You can tell from the way she’s flapping her arms excitedly that she’s just doing it to feel part of the gang. Not that we don’t depend heavily on those types of people too, but they’re going to go along with whatever’s in vogue at the time, be that National Socialism or One Direction.”

When asked what they think of rumors that the Queen’s uncle, Edward VIII, was a Nazi sympathizer, the full-time hatemongers just don’t see it.

“What we see is a grown man struggling to keep up with what the kids are into. Then it was Adolf Hitler; today it’s Justin Bieber. Everything old is new again, as the song goes.”

The Sun has pledged to continue its vital work of exposing pre-pubescent Nazi fandom, and will shortly publish a chilling exposé of the Queen’s first tentative Heil Hitler, which was performed in utero. 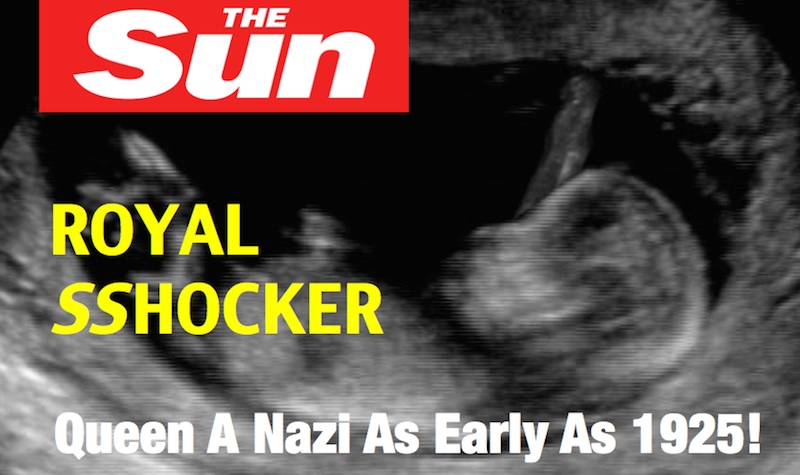