The leaked initial draft response crafted by Iranian civil servants, which has been translated back into English by University of Pittsburgh Linguistics Faculty…

Please find following a point-by-point response to your recent correspondence.

An Open Letter to the Leaders of the Islamic Republic of lran:

It has come to our attention while observing your nuclear negotiations with our government that you may not fully understand our constitutional system.

Thus, we are writing to bring to your attention two features of our Constitution—the power to make binding international agreements and the different character of federal offices—which you should seriously consider as negotiations progress.

Yeah, like we carried out a successful Islamic revolution, established an autocratic Theocracy, and have since managed to be a perennial thorn in your side, but we don’t do our homework. I mean, come on!

First, under our Constitution, while the president negotiates international agreements, Congress plays the significant role of ratifying them.

I believe this is what you refer to in your bromance movies as ‘cockblocking’ ?

In the case of a treaty, the Senate must ratify it by a two-thirds vote. A so-called congressional-executive agreement requires a majority vote in both the House and the Senate (which, because of procedural rules, effectively means a three fifths vote in the Senate). Anything not approved by Congress is a mere executive agreement. Second, the offices of our Constitution have different characteristics. For example, the president may serve only two 4-year terms, whereas senators may serve an unlimited number of 6-year terms.

Uh-huh. We know how to use Wikipedia too, BTW.

As applied today, for instance, President Obama will leave office in January 2017…

Now we’re pissed. YOU do not get to lecture us about math considering WE f*#%ing invented it. (Pardon my Farsi)

…while most of us will remain in office well beyond then—perhaps decades.

For the first time in our lives we feel sorry for America.

But we don’t have one – Psyche!

We know. We also know about the trick of crossing your fingers behind your back. Used that many times back in the 80s against Iraq. Oh, did we just mention Iraq? Saw-ree!

We hope this letter *enriches* your knowledge of our constitutional system and promotes mutual understanding and clarity as nuclear negotiations progress.

‘enriches’ — that was a good one. Respect.

**ATTN: Okay, so it looks like we’ve been punked. There’s clearly no way some of the serious US politicians listed here would have actually put their name to a juvenile document like this. Therefore it is almost certainly a spoof letter dreamt up by the Daily Show or similar to embarrass us, and hence should be ignored.

***ATTN: If by any chance this is real, we can only hope that the person behind it gets control of the White House soon. 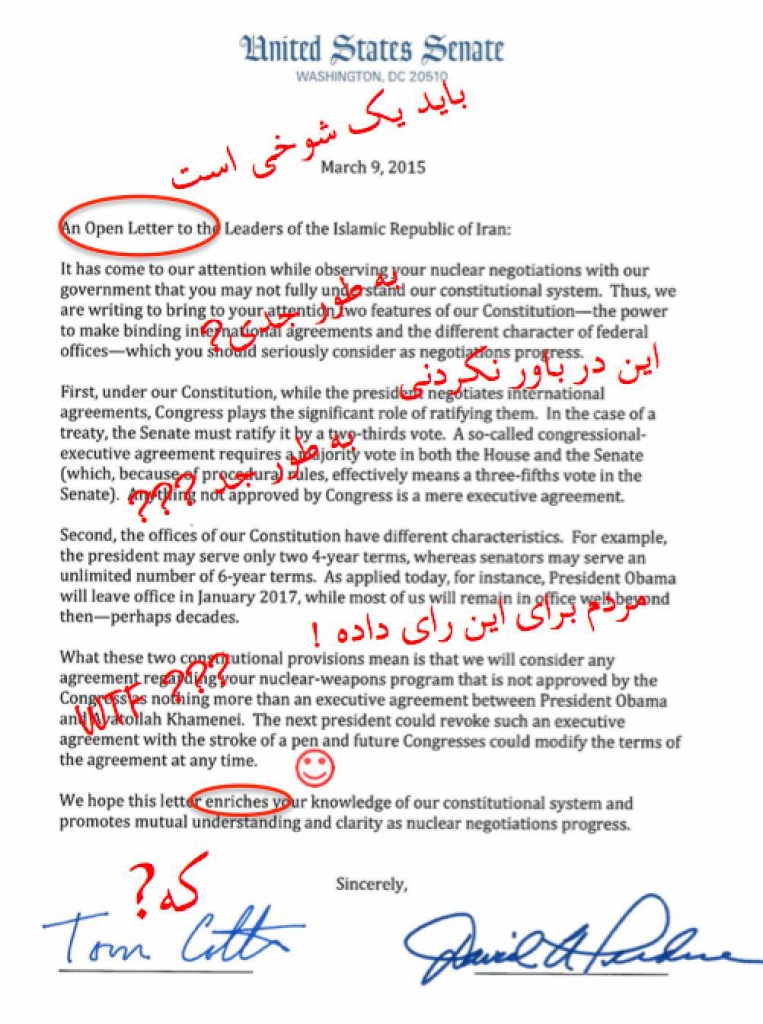